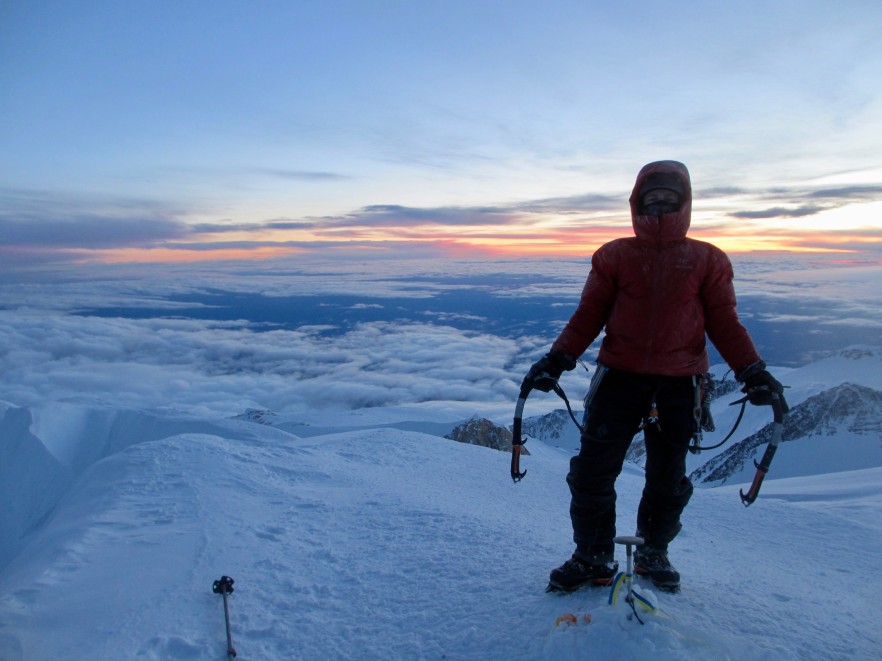 “Antony and I flew from Talkeetna to the base of Denali, intent on climbing the jewel of North American mountains via the classic Cassin Ridge, which strikes a line down the middle of the steep and foreboding South Face. But not so fast – just like all the other climbers on the mountain, almost all of whom have plans to ascend the West Buttress, we spend several days moving hundreds of pounds of equipment from 7,000 to 14,000 feet, steadily skiing up big glacial valleys, ascending foot after foot up steep snow slopes, and navigating around and over crevasses. Distances are vast and the landscape harsh. It is hard to catch a break between the duality of the scorching summer sun and frigid sub-arctic.” 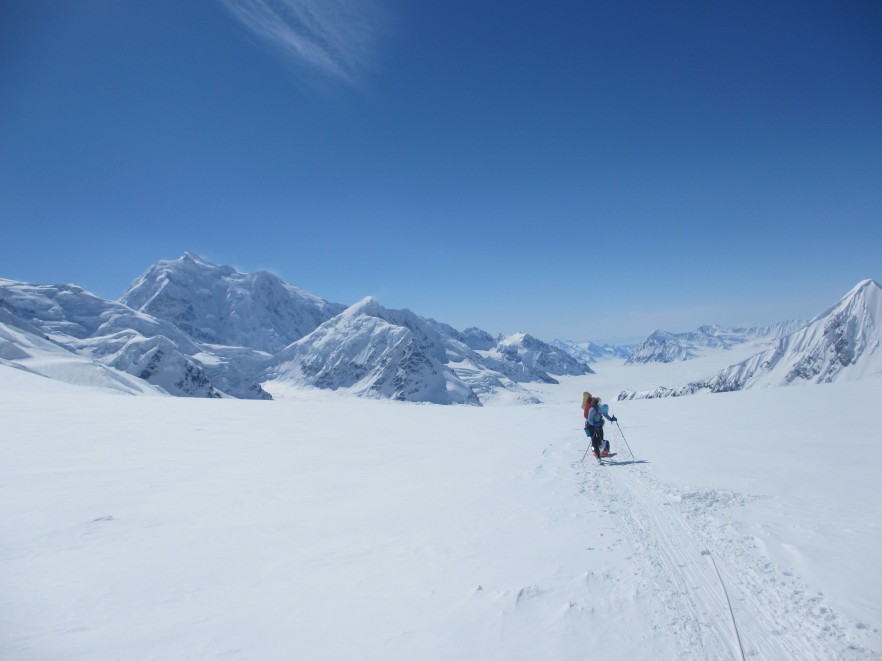 “Our fitness overpowers our lack of acclimatization and we suffer…….. The most basic adaptations of the body simply require time. Two days of rest and the weather clears brilliantly – a solid three-day window, steadily clearing as the week progresses. We slam three days and two nights worth of sustenance into our small backpacks and the next morning set off towards the South Face at 5 AM.”

“Each step is laborious, as a previous storm has left a foot and a half of fresh, sticky snow on the route. We weave from side to side of the couloir, dodging the fluffy white flow of spindrift avalanches that pour out of the steep spout marking the crux of the couloir………………….. No rush. No hurry. Hours later we top out the couloir at Cassin Ledge, a small horizontal outcrop that provides the first good bivy of the route. Our legs, as with our minds, begin to comprehend the sheer scale of Alaskan mountains ………… we unpack our simple necessities, brew water, nourish our bodies, and drift off while perched on our precarious ledge floating on a sea of majestic peaks.”

“Our third day on the route dawns clear. Calm and clear. The most beautiful day of our trip……………………. We crest the south face and make the short traverse to the true summit. We embrace, take a few celebratory photos, and begin a long descent back to camp. After 24 hours on the go, 16 days on the mountain, and several years of friendship, nothing further need be said between us. We sit quietly, listening to the roar of the stove in the early morning hours before anyone else at camp is awake. Returning from this three day dream, we drink water, look each other in the eye, and give in to the reality of sleep. Not 36 hours later, we board a plane, and inhale the sweet smells of summer in the world below.”

DONATIONS:  To support us without noticing –  when you buy from Amazon go to Amazon Smile, choose to support The Neil Mackenzie Trust, and shop as normal.  A small amount of each sale will go to the Trust. To date (Feb 2021) £85 has been donated by Amazon.