On August 15, 2021, Harlin Brandvold, Duncan Pawson, and I loaded our gear into the helicopter to make our return trip into the isolated valley of glacier-clad granite bigwalls that had come to be known as Pangea. We had flown into the valley once before in 2019, with the goal of exploring and establishing routes on the vast granite faces nestled deep within Foch-Giltoyees Park, along BC’s central coast. Having spotted the unnamed valley on Google Earth and lacking any photographs or reports of prior human travel into the valley, our initial helicopter flight was a huge gamble. But as we flew southwest from the town of Terrace, the rocky foothills eventually gave way to rugged, glaciated peaks of granite. The unclimbed 1,200m north face of Gilt Peak (1,893m) soon crested into view, marking our destination on the horizon – that has to be one of the largest granite faces in the Coast Range, I thought to myself. The scale of the wilderness embodied a prehistoric aura that would later earn the unnamed valley it’s nickname, ‘Pangea’. 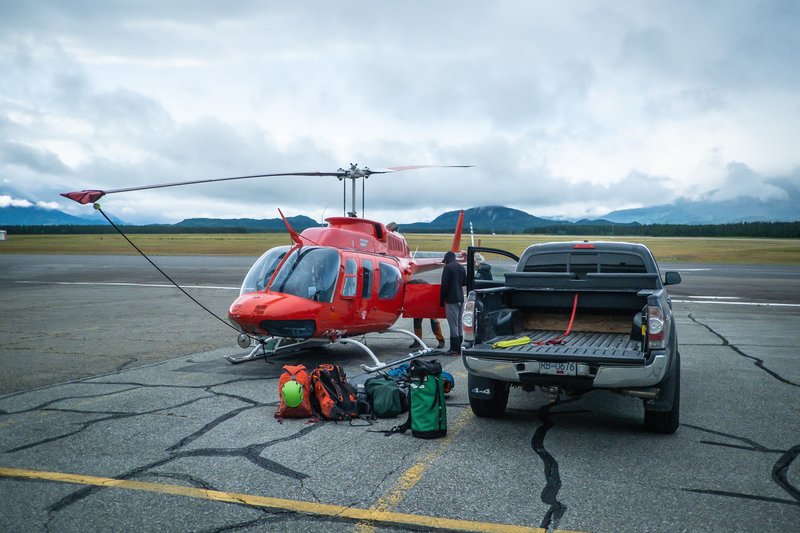 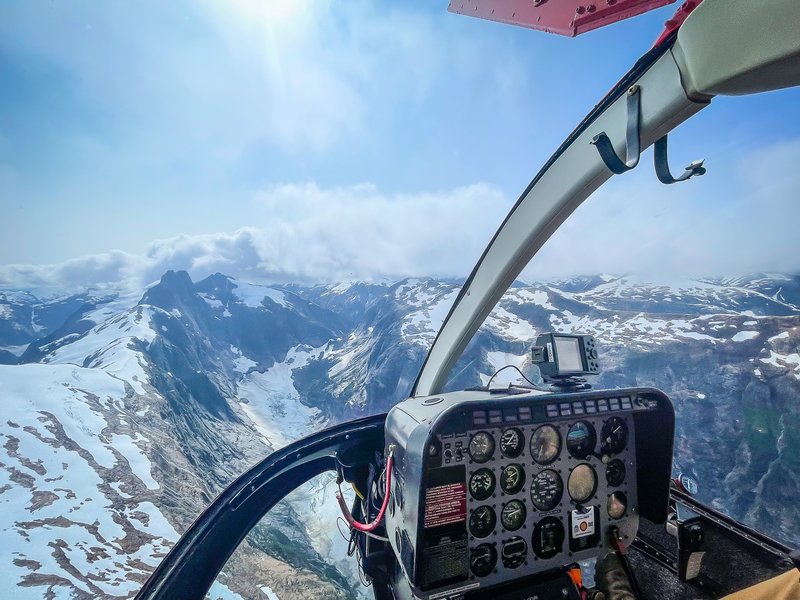 The unclimbed north face of Gilt Peak towering on the horizon.

Having been awarded the Neil Mackenzie Adventure Grant in 2020, this trip was a long time in the making. Despite our best efforts in coordinating with the local First Nations and BC Parks, park closures of Foch-Giltoyees ultimately forced postponement of our 2020 trip. For months  leading through summer 2021 park access remained an uncertainty. In a push to gain approval to access the remote area during covid times, Harlin inadvertently became an intermediary amidst the ongoing covid bureaucracy between park stakeholders. After many emails back and forth, the park was ultimately opened and Pangea 2021 received the green light.

The initial objective for our 2021 return trip had been to complete our partially established route Lizard King (5.10 C1, 300 m, so far…), which climbs a dyke and splitter chimney, perfectly bisecting the 700m face of Extinction Wall, along the northern flank of Gilt Peak. An incoming storm, which would ultimately end our trip, had thwarted our efforts on the wall in 2019 by forcing retreat from our portaledge camp atop pitch eight. Unfortunately 2021 would prove to yield familiar environmental challenges as we arrived to a wall soaked with the melt of a prior season of high snowfall – ending our bid before it began.

Through the spotting scope we scanned across kilometers of granite in every direction in search of a feasible new objective. We panned northward from Extinction Wall to Cambrian Wall; a relatively smaller feature between Chiq Peak (1,741 m) and Giltoyees-Ecstall Pass. There are no shortage of potential route options, but having been humbled here before – most notably on our 21-hour epic establishing Flight of the Dodo (5.10, 350 m) on Cambrian Wall in 2019 – we tried to keep our ambitions in check. We decided to spend our first climbing day exploring a route up an easy slab ramp up the east flank of Chiq Peak. The result was a successful warm-up day and new route; an easy ramble of mostly mid-5th with some 5.8 moves to the top of the slab. We named the route Planktonic Relationship (5.8, 450 m) for its mostly rambling character while not actually going anywhere significant. Comfy shoes and bug spray are highly recommended. 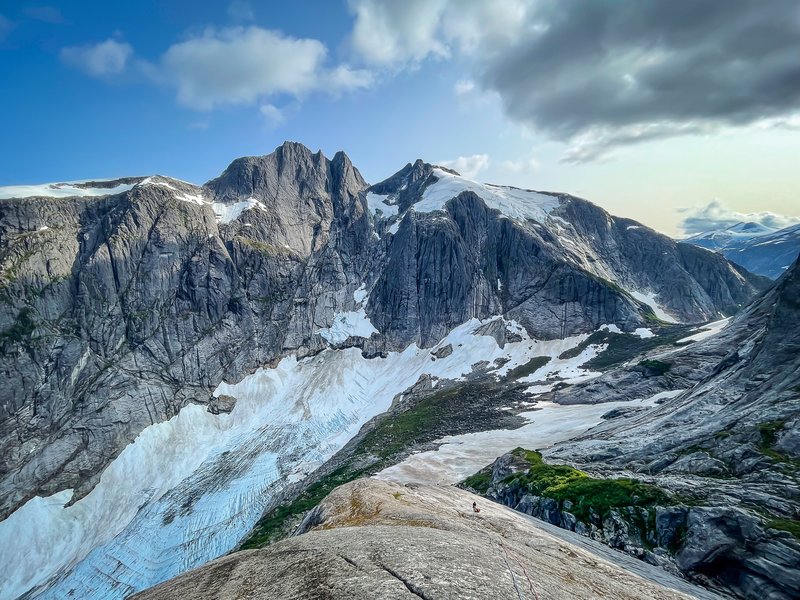 The FA of Planktonic Relationship (foreground), and the massive N face of Gilt Pk (left) and Extinction wall (right).

The following morning, with a warm-up climb under our belts, we felt more willing to set out for a larger object. So yet again, we scanned the vast granite walls through our spotting scope. Eventually, a prominent buttress on the south face of Chiq Peak caught our attention; featuring a succession of discontinuous cracks and corner systems spanning most of its 600m relief. A promising line! We each loaded up ropes and racks and set out across the valley that same morning, excited for the potential objective ahead, despite the significant unknowns that it may hold. 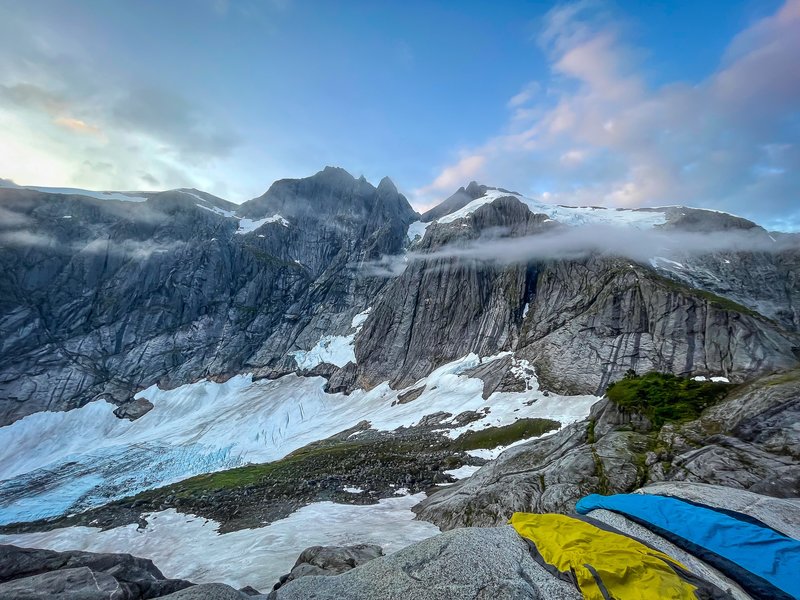 Bivy at the base of the wall, looking on to a moody Nautilus Wall and Extinction Wall.

Only about 600 m north-northwest of our basecamp, atop a snow slope and some fourth class scrambling, we reached the base of the wall. Wasting little time, I tied in, pulled over a small roof, and pieced together the first pitch. Then, Duncan and Harlin each led a successive pitch; tiptoeing across a basalt dyke, then out onto slabby face climbing, bolting on lead as necessary. The slab featured some of the most peculiar and undulating granite I had ever seen: ripples, chickenheads, and pods. Features that we later learned could result from hydrostatic pressures at the interface of rock and glacial ice. This made for excellent, balency 5.10 slab climbing to Harlin’s bolted anchor above. Darkness approached and we fixed lines to the base and descended back to camp to wait out a storm the following day. We spent our weather day huddled under a blue Canadian Tire tarp we had rigged up to a boulder. We ate well and enjoyed festivities prepared by the Ministry of Fun and Games (Nick); Jamesons whiskey and

Only about 600 m north-northwest of our basecamp, atop a snow slope and some fourth class scrambling, we reached the base of the wall. Wasting little time, I tied in, pulled over a small roof, and pieced together the first pitch. Then, Duncan and Harlin each led a successive pitch; tiptoeing across a basalt dyke, then out onto slabby face climbing, bolting on lead as necessary. The slab featured some of the most peculiar and undulating granite I had ever seen: ripples, chickenheads, and pods. Features that we later learned could result from hydrostatic pressures at the interface of rock and glacial ice. This made for excellent, balency 5.10 slab climbing to Harlin’s bolted anchor above. Darkness approached and we fixed lines to the base and descended back to camp to wait out a storm the following day. We spent our weather day huddled under a blue Canadian Tire tarp we had rigged up to a boulder. We ate well and enjoyed festivities prepared by the Ministry of Fun and Games (Nick); Jamesons whiskey and Fireball paired with crib and yahtzee. 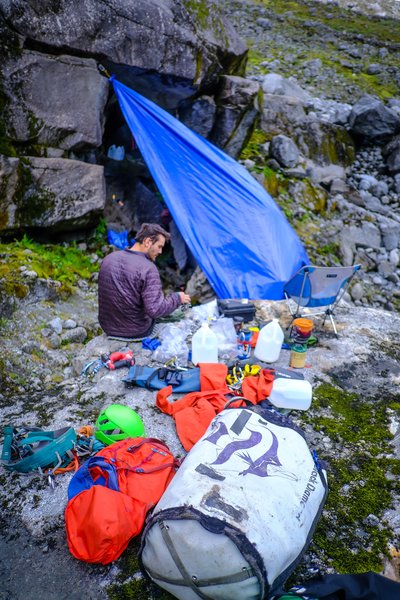 I awoke the next day to a gloomy valley with low clouds rolling past it’s seeping walls. We each peered through the spotting scope to take stock of the terrain above and set milestones for the following days. After many hard-learned lessons, setting achievable goals had proven to be one of the most important pieces of advice I had received for first ascent climbing. We set off, having packed another 200 meters of rope, an ungodly amount of rack, bolts, and drill batteries as well as our bivy gear, prepared to spend the next few nights camped at the base of the wall. Shuttling gear to the base took the full day. Hauling heavy pigs proved to be the challenge of the day. We rigged up a haul line to drag them up the steep snow slopes; Duncan and I clipped into the haul line and ran backwards down slope as the bags made slow progress upwards. This was repeated many times. The slabs and roofs proved to be an even more fearsome adversary – as the pigs hung up on every feature they could find on their journey upwards, ultimately earning us a coreshot in one of my 100 m static ropes. By the end of the day, all our gear was staged at the base of wall, ready for a multi-day effort on the wall. The time spent hauling gear also allowed some time for the rock to dry off before our next push. 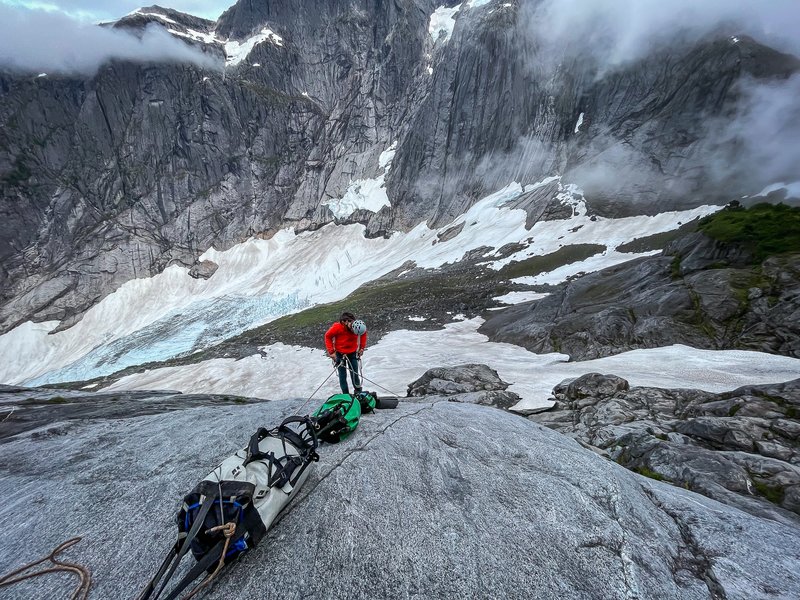 Hauling piggies to the base of the wall to bypass 100 m of 4th class scrambling with heavy haul bags. 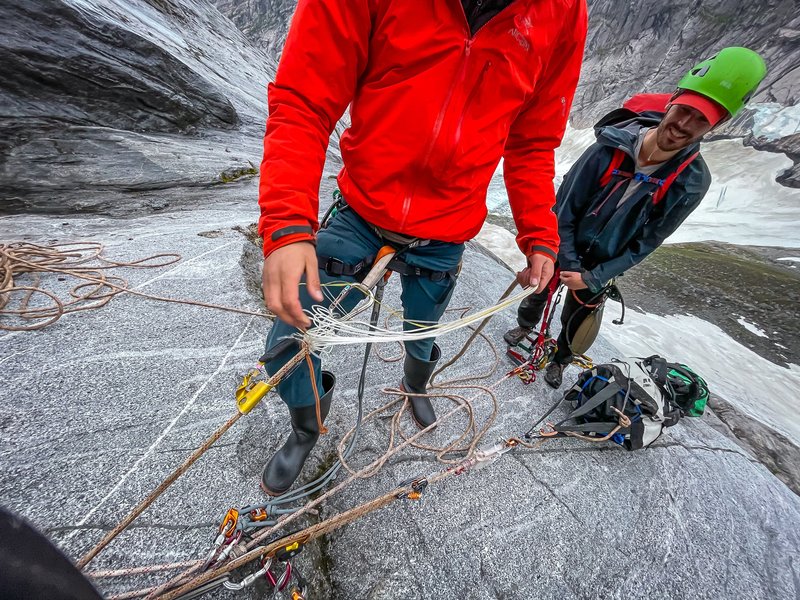 The next morning, we charged up the fixed lines under blue skies. Duncan led diagonally across the slab into a groove, eventually meeting the base of a prominent corner that splayed into a dihedral topped with a vegetated roof. Pitch five began with some initial mossy hand jams before quickly shooting out right through technical and adventurous face climbing. Duncan drilled a handful of generously spaced bolts between sporty 5.11- moves, eventually leading into a beautiful, clean hand crack. The stellar fifth pitch concluded with glorious hand jams as the angle eased. I finished the day off with a short seventh pitch, and descended our fixed ropes back down to our bivy at the base of the wall. 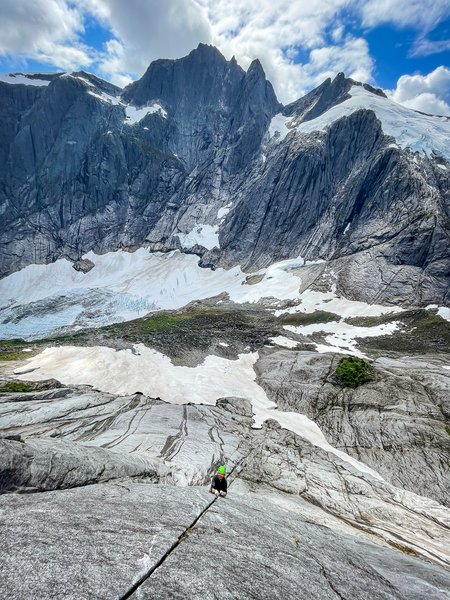 The following morning, Scandinavian power metal roared through our portable speaker as Harlin took the lead on one of the major unknowns of the route, questing across slab into a steep, shallow grooves – hooks and aid ladders at the ready. A combination of free climbing, hooking, and bolting led him through the technical crux of the route. A drilled bat hook was used to surmount a short, particularly blank section. Harlin completed the pitch and then Duncan and myself swung leads for the next two pitches to deliver us to lower angle terrain atop pitch nine. Once again, we fixed ropes and descended. Now we had every single one of our ropes strung up on the wall to their max extent, 400m in all. 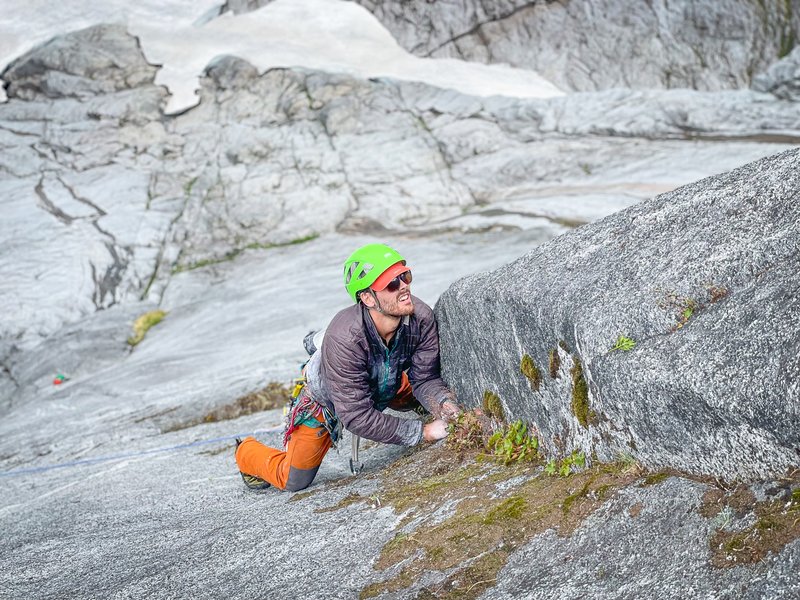 The commute back up the nylon highway the next day took some time. At the top we pulled our last and penultimate ropes for the final push. Six more pitches of 5.9 rock mixed with heather scrambling led us to a logical end to the route, from which it looked possible to hike and scramble the remaining few hundred meters to the summit of Chiq Pk. We did not venture to the summit – and we are unsure if anyone else ever has – but night would be closing in soon and we had a lot of wall to descend. After a brief celebration, we bolted the final anchor on what would become ‘Disaster Fauna’ (5.11 A0, 550 m) and rappelled to the ground. 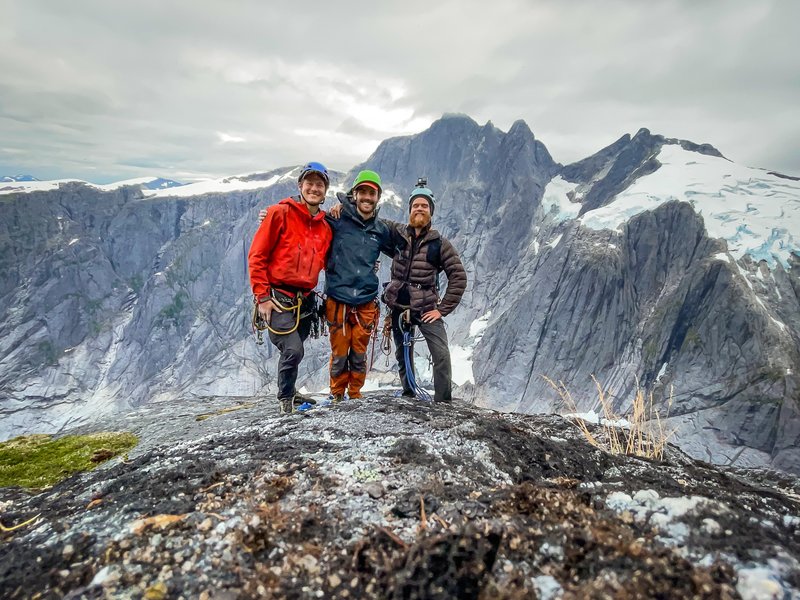 We re-climbed the first nine pitches the following day in an attempt to free every move and clean up some of the vegetated sections. We were able to free everything except one move on the seventh pitch, which we hypothesized could go free around 5.12. An extra aid bolt was added in lieu of the drilled bat hook to aid future parties, creating a three bolt ladder mid-pitch and preserving the attainable 5.11 grade. Satisfied with our efforts, we cleaned our fixed lines and rappelled to the ground for the final time. 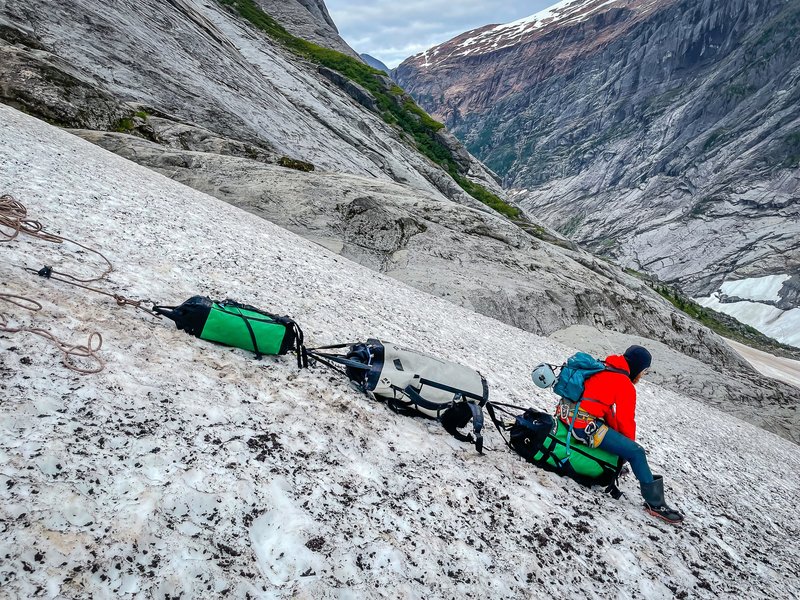 With bad weather on the horizon, we messaged our helicopter pilot and asked for an early exit from Pangea. We spent our last day in Pangea packing up camp, taking in the scenes of the valley, and finishing off our whisky in the sun. We lamented on the grandeur of the region; this being just one of many untouched granite cirques to be found nestled amongst BC’s remarkable and vast Coast Range.

DONATIONS:  To support us without noticing –  when you buy from Amazon go to Amazon Smile, choose to support The Neil Mackenzie Trust, and shop as normal.  A small amount of each sale will go to the Trust. To date (Feb 2021) £85 has been donated by Amazon.